Crime of the Week

If you have any information about these crimes or any person(s) involved, you are urged to call Crime Stoppers at 745-3333 or submit a Web Tip on this secure website.  You do not have to give your name.  Your call could earn you up to $1000.00, if the information leads to the arrest or criminal indictment of suspect(s).

On Sunday, 5/17/2020 at approximately 7:46 AM, the Alaska State Troopers received a report of a large sawmill stolen from property located on W. King Arthur Dr. in Houston.  Investigation revealed someone removed a red Wood-Mizer LT15 sawmill with track, valued at approximately $10,000.00 from the property.  The incident occurred within the last two weeks. Pictures of the sawmill are attached.

If you have information about this or any Felony crime, call Crime Stoppers at 745-3333, submit a tip via the web at www.matsu-crimestoppers.org or download the free P3 Tips mobile app for your smartphone (photos and videos accepted). Your tip could earn you up to $1,000 if the information leads to the arrest or criminal indictment of the suspect(s).  Callers to Crime Stoppers do not have to give their names. Crime Stoppers pays for information on other Felony crimes, Felony fugitives, and the sale of illegal drugs if an arrest or indictment results from the “Tip”. 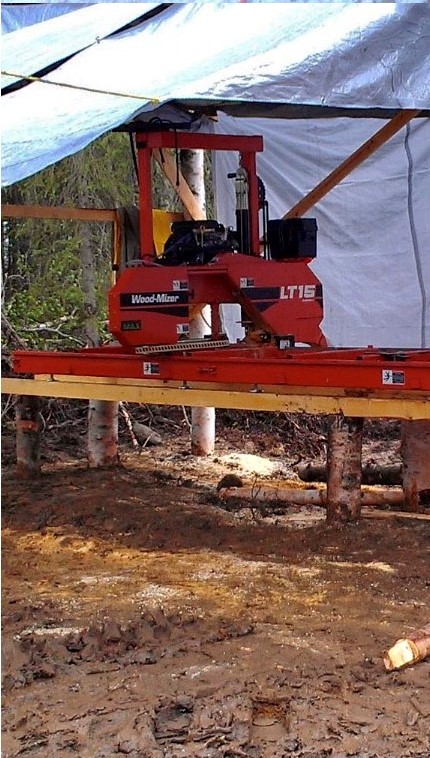 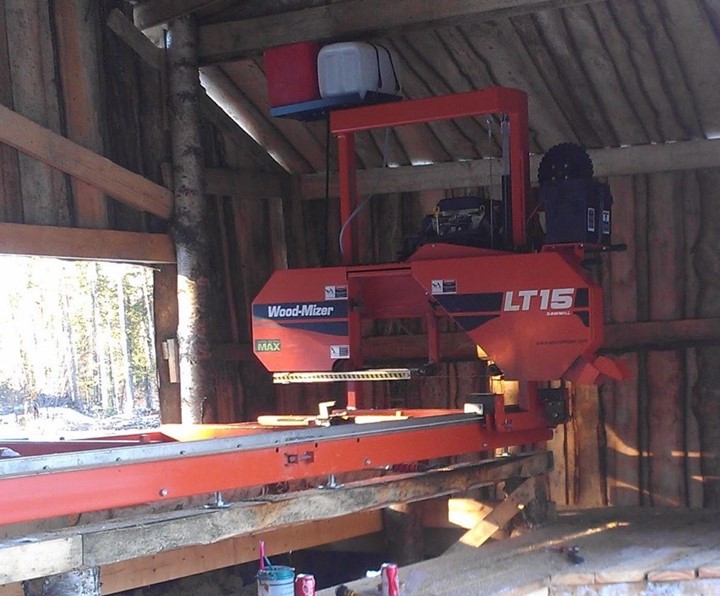 On Saturday, 12/28/2019 at 4:50 PM, the Alaska State Troopers received a request for a welfare check on John Kellogg, age 47 of Wasilla. The Alaska State Troopers located Kellogg deceased in the area of Greenstreet Circle near the Parks Highway and Hyer Road in Wasilla. The State Medical Examiner responded and took possession of Kellogg’s body. Next of kin has been notified.

The Alaska State Troopers - General Investigative Unit is continuing to investigate the circumstances surrounding the death of John Kellogg. Kellogg was found deceased in the area of Greenstreet Circle near the Parks Highway and Hyer Road in Wasilla. Investigators believe that Kellogg died in that area on Wednesday 12/25/2019.  Anyone that was in the area of Greenstreet Circle on Christmas Day or has any information concerning Kellogg or his death is asked to contact the Alaska State Troopers at 745-2131.  You can also remain anonymous by contacting Mat-Su Crime Stoppers.

On Saturday, 11-16-19 the Wasilla Police responded Philly’s Best on Herning Avenue for a report of a burglary that occurred overnight. An unknown suspect pried the door open and stole cash, destroying the cash register. All loose change was left behind.

On Sunday, 11-17-19 the Wasilla Police responded to the Denali Family Restaurant on Parks Hwy for a report of a burglary that took place overnight. Someone had broken into the building, destroyed the cash register and stole cash from the cash register. Loose change was scattered on the floor.

On 6-29-19, the Wasilla Police Department received a report of Burglary from a residential garage unit off Nicola Ave in Wasilla. The complainant reported that sometime during the night/early morning of June 2nd, a garage was burglarized. Stolen were multiple car parts for a 1977 Lincoln Continental including:

Many of the stolen car parts were still in boxes with invoices attached.

On Monday, 5-20-19 at 10:05 AM, Trooper dispatch received a report of a burglary that occurred at a residence on Chickaloon Road in Wasilla. Investigation reveals someone broke into the residence around the 1st week in May and stole three rifles and two pistols. The pistols were described as a Ruger .22 cal revolver and a Ruger Black Hawk stainless .44 Magnum. The rifles were described as a Winchester model 70 .270 cal, a Remington Model 7600 pump action 30.06 and a Thompson Center Arms Model Triumph .50 cal muzzle loader.

On Wednesday, 4-17-19 at 8:05 AM, the Wasilla Police Department responded to Iditarod Headquarters located at 2100 S. Knik Goose Bay Rd., for a report of theft.  An investigation of the incident indicates that sometime in the early morning hours someone had attempted to gain entry into the vending machine but appeared to be unsuccessful.  Significant damage was sustained by the vending machine.  Additionally, a small custom-made trailer sled used behind a dog sled was taken from the property.  It is approximately 2’ wide, 4’ long and valued at $1,600. There are no suspects or leads at this time. 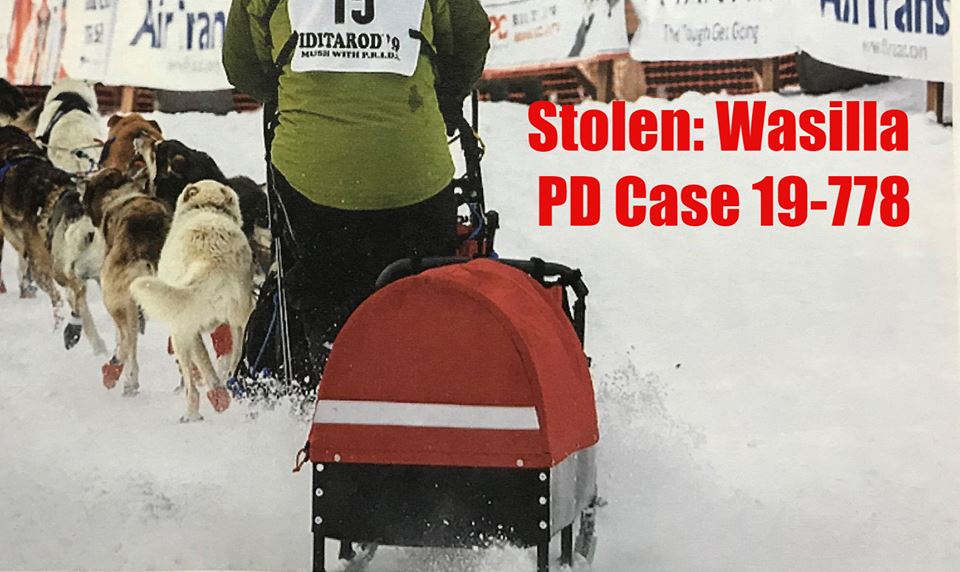 On Tuesday, 1/28/19 at approximately 9:28 AM, the Alaska State Troopers received a report of a burglary at the State of Alaska Department of Transportation facility located at the Willow Airport Complex, Mile 71 ¼ W. Parks Highway. Investigation revealed a structure was entered by force and the items stolen were two Stihl chainsaws, a Stihl cut-off/demolition saw, a Honda Eu2000i Generator and a Honda water pump.  Approximate loss is $3,500.

During the afternoon of Monday, November 26, 2018, the Palmer Police Department received a report of construction tools stolen from a Chevy Silverado 3500 truck.  The vehicle was parked at a job site near the Fish and Game building located on the Glenn Highway in Palmer.   Stolen were various Milwaukee tools including an 18-volt battery operated press MD6 ton crimper, 18-volt portable band saw; 18-volt fuel Sawzall, 18-volt fuel impact driver and four Milwaukee batteries.  The tools were engraved with EPC3 (Electric Power Constructors).  In addition, one set of Burndy MD6 WC dies, a black reel of #6 solid copper wire and a black reel of #4 stranded copper wire were stolen with an estimated value of $3,752.00. 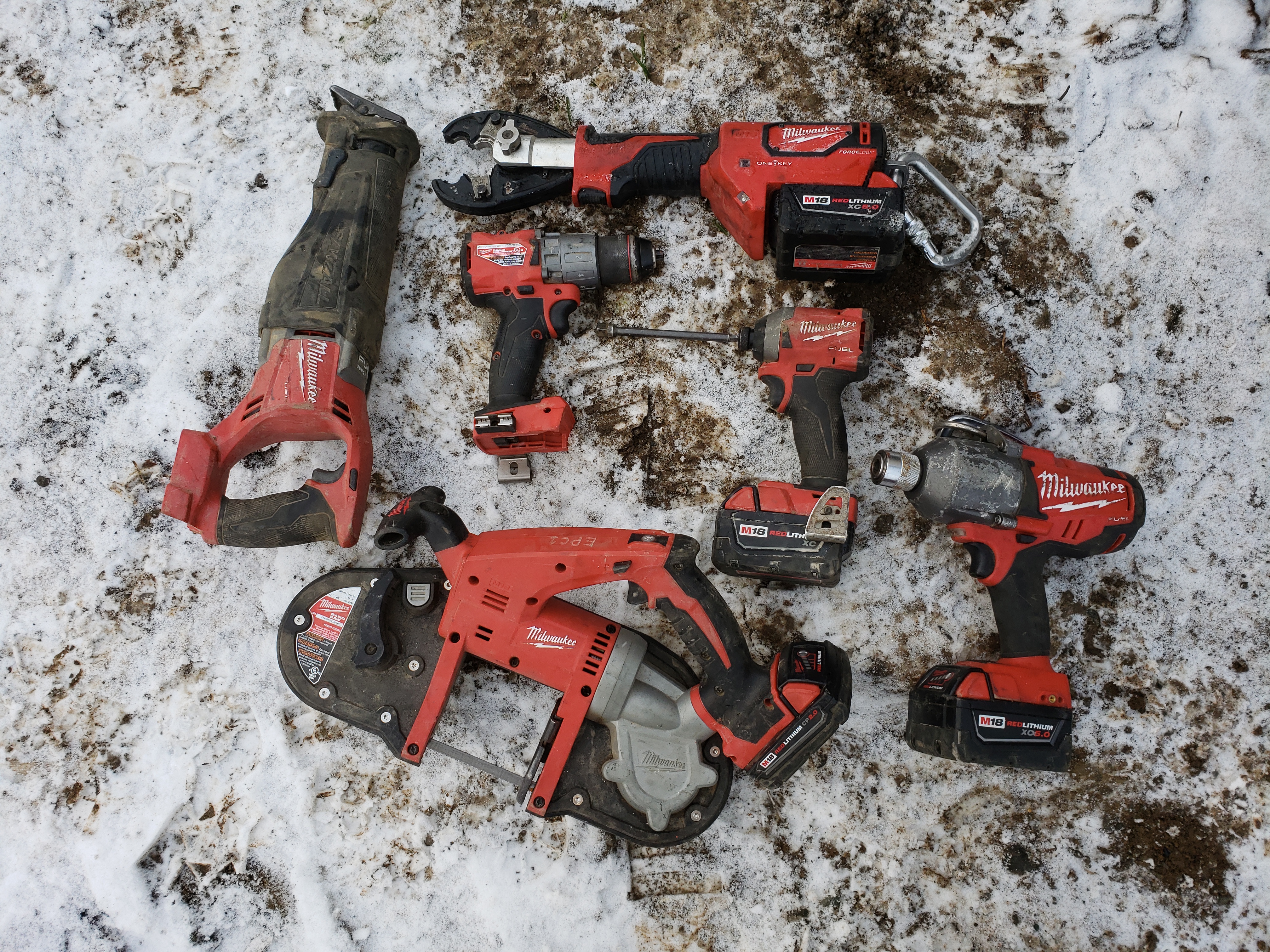 On Thursday, 10/18/18 at approximately 9:57 AM, the Alaska State Troopers received a report of a burglary located at Mid Valley Christian Center on S. Hay Street in Wasilla. Investigation determined unknown suspect/s entered the building and stole a Takamine Acoustic-Electric guitar and other property in excess of $1500 of property. Investigation is ongoing.

On Sunday, September 3, 2017, the Palmer Police Department received a report that most of the merchandise at the Releaf Alaska and CBD Cannaboid booth had been stolen at the Alaska Fair grounds in Palmer.  The booth was located in Raven Hall, which was locked up the night before.  A nearby booth had surveillance cameras and captured footage of two white males carrying large trash bags or duffle bags and were attempting to gain access to many of the booths.   Estimated value of the stolen merchandise was $10,000. 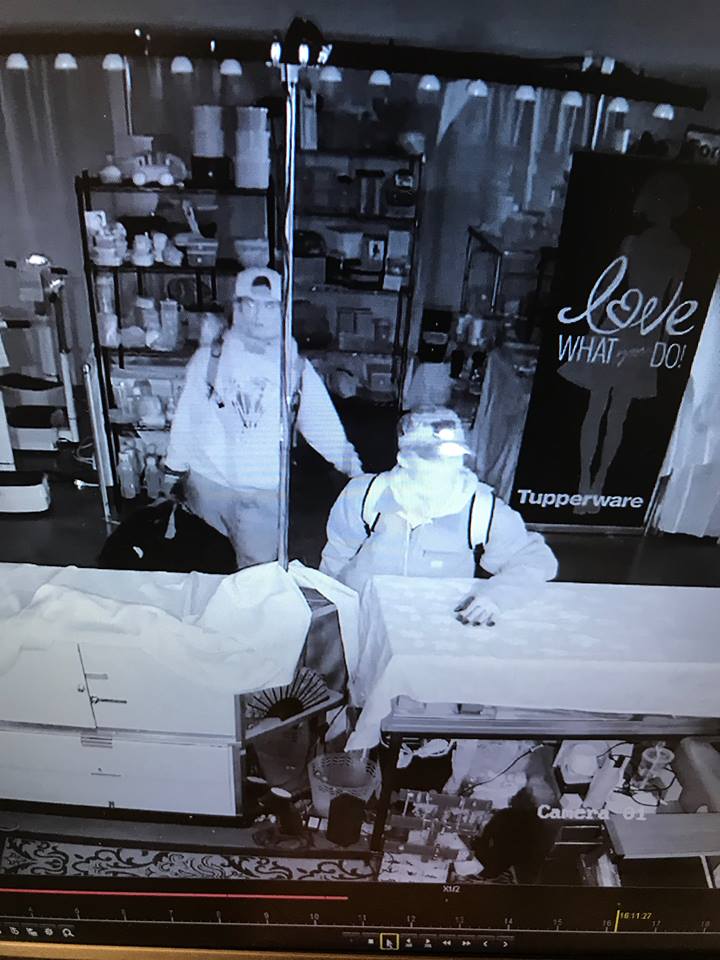 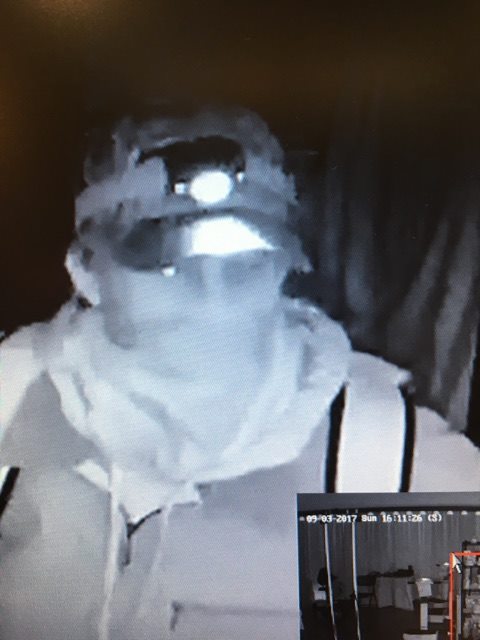 On 9/8/18 at approximately 4:30 AM, the Alaska State Troopers received the report of a burglary located on W. Misty Lake Road off Hollywood Road in Wasilla. Investigation determined 16 firearms which included 10 rifles, 3 shotguns and 3 pistols as well as firearm parts were stolen between Saturday 9/7 at 3 PM and Sunday 9/8 at 4 AM. Investigation is ongoing and anyone with information regarding the theft is encouraged to contact the Alaska State Troopers or submit an anonymous tip to Mat-Su Crime Stoppers.

On Thursday, 11/23/17 at approximately 8:10 PM the Alaska State Troopers responded to a report of a theft of multiple firearms which include a Magnum revolver, a Mossburg bolt action rifle, a Semi-automatic Winchester 70-223 rifle, a Rossi single shot rifle, as well as two Mossberg pump action shotguns and a Witte Hardware Company shotgun.  The firearms were stolen from a residence off Scarlet Circle in Wasilla and are valued at approximately $5,000.

On Wednesday, 4/18/18, the Alaska State Troopers responded to an MTA cell tower near Mile 83 of the Parks Highway in Willow for a report of damaged property. Investigation revealed that at approximately 6:30 AM, multiple large caliber gun shots were fired from either the ATV trail nearby or the Parks Highway into a communications equipment shed.  Damage to the structure is estimated at over $6,000.

On Monday, 1/22/18 at approximately 2 PM the Alaska State Troopers responded to a report of a theft off Knik Goose Bay Road in Wasilla. Investigation revealed that a red and black Lincoln welder mounted to a single axel trailer was stolen from a construction site during the past weekend.  The welder is valued at $4,500.

On Monday, 9/25/17 at approximately 10:00 PM, the Alaska State Troopers received a report of a vehicle theft involving a 2008 500cc Arctic Cat ATV Serial #4UF08ATV18T212625. Investigation revealed that on 9/25 between the hours of 4:30 AM and 5:30 PM the ATV was stolen from a residence located on S. Lewis Loop in the area of Knik Goose Bay Road in Wasilla.  The ATV did not have the keys in the ignition and is described as camouflage in color, with a grill guard, a Warn winch and a gun boot on the passenger side. Total value is $6,000. 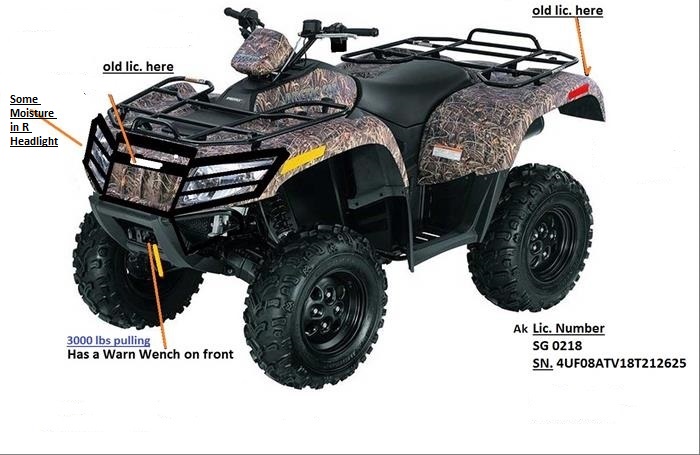 On Monday 8/7/17 at approximately 5:06 AM, the Alaska State Troopers responded to a call of a burglary at a location on E. Schrock Road in Wasilla.  Investigation revealed that unknown suspect(s) unlawfully entered a dwelling and stole an Energy Storm Inverter Generator Model 3000i and an Echo chainsaw with a 16” bar.

Since 2014 there have been approximately 55 reports of CBU commercial cluster mailboxes damaged or destroyed throughout the Mat-Su Valley.  Incidents have included boxes that have been completely destroyed or an attempt to break in as well as mail recovered from different locations.  If you have DETAILED information on suspect persons or vehicles involved in these incidents, please submit your tip to Mat-Su Crime Stoppers. 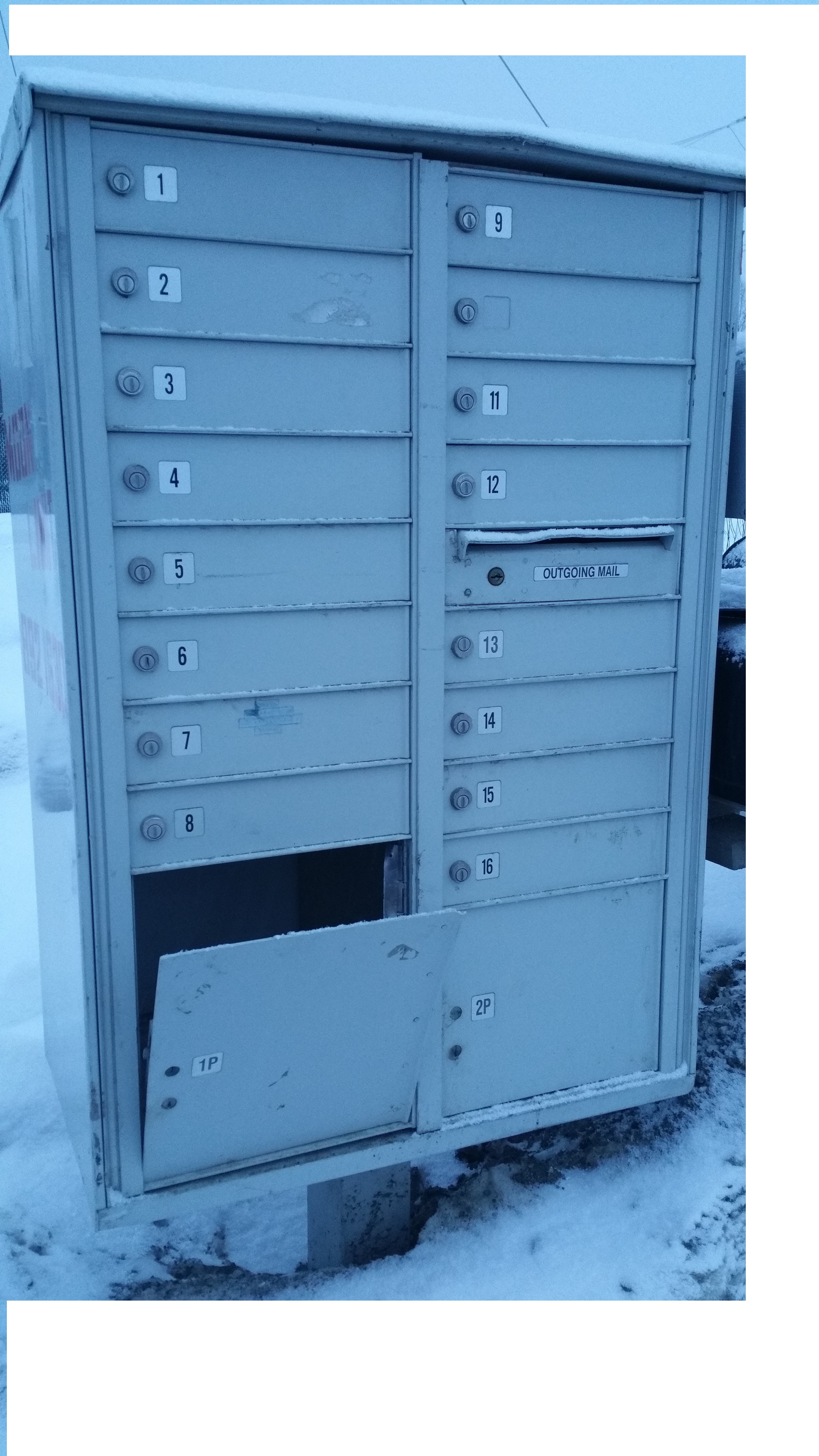 On Friday, 2-6-17, the Alaska State Troopers received a report of a diesel generator stolen from an outdoor storage building at the Chickaloon Tribal Council located at 21117 E. Myers Avenue in Sutton.  Investigation revealed the generator was purchased through a federal auction and a sticker with the number “32” as well as an auction lot number was affixed to it.  It is suspected the generator was stolen during the week of January 30th.  The generator is valued at over $33,000. On Wednesday, 9/30/16, the Alaska State Troopers responded to a report of a motorcycle stolen sometime after 9/9/16 from a residence located on Hematite Drive in Wasilla. The motorcycle is described a lime green 2007 Triumph with aftermarket gold handle bars, LED tail light and a custom head light. Total value is approximately $6,200. 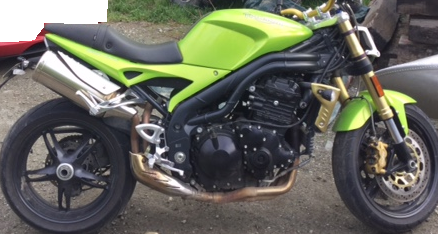