Crime of the Week

If you have any information about these crimes or any person(s) involved, you are urged to call Crime Stoppers at 745-3333 or submit a Web Tip on this secure website.  You do not have to give your name.  Your call could earn you up to $1000.00, if the information leads to the arrest or criminal indictment of suspect(s).

On Friday, 7/29/16, at approximately 2:39 AM, Alaska State Troopers with Wasilla Police and K-9 Marshall responded to a reported robbery at the Tesoro gas station located on Knik Goose Bay Road at Fairview Loop in Wasilla.  Investigation revealed a lone person entered the front door with a baseball bat.  The suspect ordered the front clerk to fill a white plastic garbage bag with the cash from the register. The male then fled on foot and was unable to be located.  The suspect is described as possibly an adult white male, wearing a black hooded sweat shirt and black mask with a white skull image on it. No injuries were sustained and the investigation continues.

On Tuesday 7/21/16 at approximately 1:16 AM, Alaska State Troopers responded to a report of a home invasion on Plumley Road in Palmer. Investigation revealed two people who were unknown to the homeowner entered the residence through a window. When the homeowner confronted the assailant with a firearm, an assailant shot the homeowner in the arm. Both suspects fled the residence on foot. WPD responded with a K9 to assist with tracking the suspects but they were not located. The homeowner was transported to Mat-Su Regional Medical Center for treatment of his injuries. One other person was in the home at the time of the break in but was not injured. Palmer and Anchorage ABI responded. Investigation is ongoing. The names of the homeowners are not being released at this time due to the circumstances surrounding the investigation.

On Thursday, 12-10-15 at approximately 4:49 AM Alaska State Troopers responded to the area of Schrock Road and Burlwood Avenue in Wasilla for a report of a male laying on the ground with injuries who appeared to have been hit by a car. Investigation revealed the victim was walking on the side of Schrock Road and was struck by an unknown passing vehicle. The victim sustained serious, but non-life threatening injuries and was taken to Mat-Su Regional Medical Center for treatment of his injuries.

On Monday, 3-30-15 at approximately 4:11 AM, a 911 call was received by the Alaska State Troopers stating the Hill Top Tesoro in Sutton had been burglarized. Troopers arrived and an investigation revealed the Hill Top Tesoro was broken into between 1:40 AM and 2:00 AM.  Two security windows were broken, a cigarette machine was heavily damaged, and several hundred dollars’ worth of tobacco products, and an undetermined amount of cash was taken from a donation bucket. The donation bucket was to assist a family in a recent fire that lost their entire home. The suspect is described as a white or Native male or female, approximately 5’7” to 5’10” tall and 200 to 220 lbs.  Investigation continues. 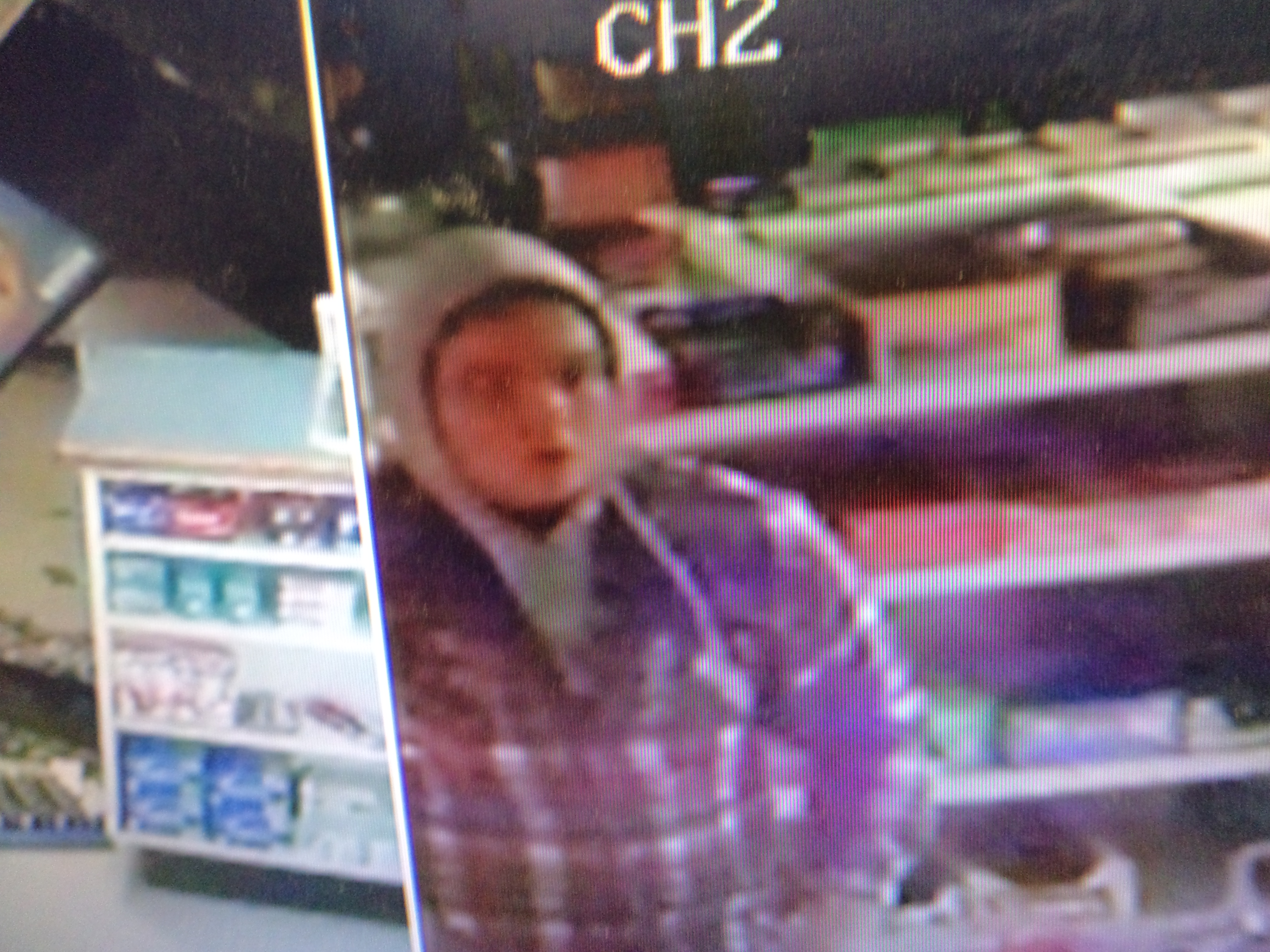 On Thursday, 3-11-15 at approximately 12:33 PM, Alaska State Troopers responded to a report of a burglary after the fact at a residence located on S. Morgan (in the area Sylvan Lane and Hollywood Road) in Wasilla.  Investigation revealed someone had entered the residence and stole a Sentry safe containing personal documents and a large sum of cash.  Approximately thirty firearms were taken from the residence.  Total value of the items is estimated over $50,000.00.

On 2-9-15 at approximately 7:40 PM Alaska State Troopers responded to the Geneva Woods Pharmacy on Seward Meridian Parkway in Wasilla for the report of an armed robbery.  Investigation determined that an unknown male forced entry through the back door of the pharmacy while the lone pharmacist was preparing to close the pharmacy for the evening.  The suspect was armed with a firearm and forced the pharmacist to fill up a large tote with all of the controlled prescription medication.  The pharmacist was unharmed during the robbery.  Investigation is ongoing.

On Monday, 12-9-13, at approximately 8:00 PM, it was reported to the Alaska State Troopers that Theodore Konyot, age 60 of Palmer, was found deceased by a family member in his home located at approximately Mile 1.1 Knik River Road, in Palmer. Troopers responded to investigate the cause and circumstances of the death. Next of kin has been notified. Investigation is ongoing by Alaska Bureau of Investigation, but Konyot`s death has been determined to be a homicide. Anyone with information relating to Konyot`s death, or who had any contact with Konyot, or saw suspicious activity in that area from Saturday, 12-7 through Monday, 12-9 is asked to call the Alaska State Troopers, Inv. Adams, at 746-9106 or if you would like to make an anonymous report call Mat-Su Crime Stoppers at 745-3333.

On Wednesday, 11-20-13 at approximately 6:55 PM Alaska State Troopers responded to a report of a theft at a residence on Yarrow Road located near Norman Avenue in Palmer. Investigation revealed unknown person(s) entered a yard and stole a Wood Miser LP15 sawmill.  The sawmill was estimated to be worth $9,000. Investigation continues.

On Saturday, 9-21-13 at approximately 1:25 AM, Alaska State Troopers and the State Fire Marshall’s Office responded to a residence on Woodruff Drive located near Tanis Road and Wasilla Fishhook-Road in Wasilla to investigate a suspicious residential fire.  Investigation revealed unknown suspect(s) started a fire inside the residence causing approximately $10,000 in damage.  Investigation is continuing.

On Sunday 2-10-13 at approximately 7:40 AM, Alaska State Troopers received a report of arson/criminal mischief at a residence located on Agate Lane in Wasilla.  When Troopers arrived at the residence, a green Chevrolet van was parked in the driveway and it was observed that the van was badly burned and there were charred remains of large fireworks on the seat of the vehicle.  It is unknown who is responsible for this crime.  Estimated damage to the vehicle is over $1,000.

On Tuesday 1/8/2013 at approximately 8:33 PM, Alaska State Troopers received
a report of an assault and shooting at the Alcantra Recreational Center located on Seldon Road in Wasilla.  Investigation revealed that an 18 year old male was assaulted by 4 unidentified males before being shot in the leg.  The 4 unidentified males left the area in a small silver car.  The 18 year old male was initially transported to Mat-Su Regional Hospital and was later reported to be in stable condition.  Drugs are suspected to be involved.  This case is currently under investigation. 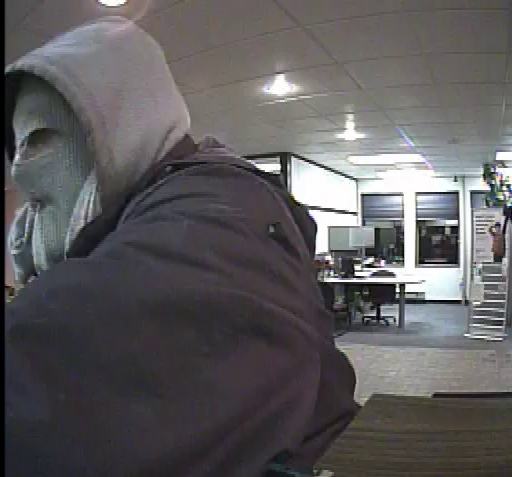 On Wednesday, 1/2/13 at approximately 4:46 PM Wasilla Police were notified that Key Bank located on Lucille Street in Wasilla had just been robbed.  The suspect wielded a box cutter and fled on foot with an undisclosed amount of money.  The suspect is described as an adult white male 5`7” wearing a black Carhartt jacket and pants.  The suspect was also wearing a hood with what appeared to be a cut out ski mask. 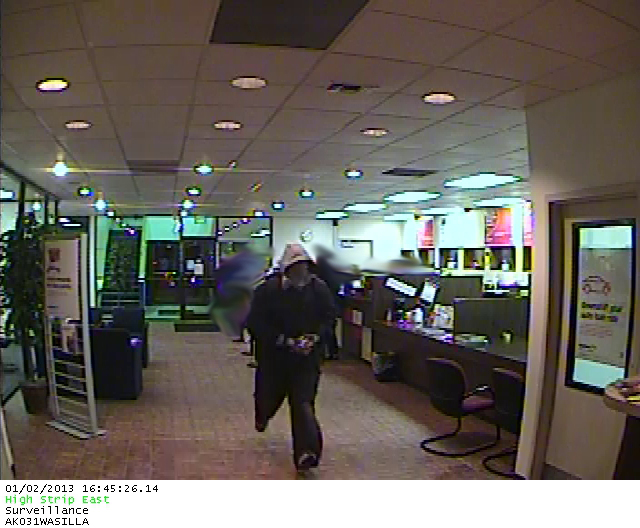 On Monday, 10/08/12 at approximately 10:30 AM Alaska State Troopers responded to the Sacred Heart Catholic Parish on Bogard Road in Wasilla for the report of burglary and theft. Investigation revealed sometime between 10/07/2012 at 6:00 PM and 10/08/2012 at 8:00 AM, an unknown person entered the Parish and stole approximately $6900 worth of religious-specific property and damaged items valued at approximately $100. The investigation is continuing.

On Tuesday August 7, 2012 at 3:33 AM, a caller phoned 911 to report a fire at the Matanuska Maid Building in downtown Palmer. Palmer Fire & Rescue responded to the scene, with mutual aid assistance from the Mat-Su Central Fire Department. Palmer Fire & Rescue Chief John McNutt arrived to see fire emerging from under the eaves of the building. Within moments, the entire roof of the structure was engulfed in flames.

A perimeter was established, and aerial (ladder) apparatus from both Palmer and Mat-Su Central surrounded the fire using the aerial apparatus to fight the blaze. A total of 31 fire apparatus were on scene to assist. There were no reports of injuries, but the historical building is a total loss. The fire was knocked down by 6:40 AM, and crews remained to monitor the safety of the scene. The State of Alaska Fire Marshal’s office was called to the scene to assist in the investigation into the cause and origin of this fire.

It was reported a silver 4 door pickup was seen leaving the area at a high rate of speed when the fire was first detected.

On Thursday 6/28/12 at approximately 12:30 AM, Troopers responded to 24350 W. Pool Drive in Willow for the report of a structure fire. Investigation by Mat-Su Borough Fire and Troopers determined the structure had no known source of ignition within the structure and was an abandoned building. Fire personnel also determined there were no individuals inside the structure at the time of the fire as the fire was extinguished. The State Fire Marshal’s Office is responding to assist with the investigation into the cause and origin of the fire. The value of the property according to the Mat-Su Borough web site is $42,500. Investigation is continuing

On 5/29/12 at approximately 5:00 AM, Alaska State Troopers received a report of a burglary from the Three Bears Store on Knik-Goose Bay Road in Wasilla. Investigation revealed a large amount of cash of was stolen from the store sometime during the early morning hours. The investigation is ongoing.

A Palmer Grand Jury indicted nine individuals on a combined 72 felony charges on Sept. 29, 2011 stemming from the theft of 38 firearms from the Three Bears store along the Palmer-Wasilla Highway on Sept. 18, 2011. The indictment is a result of a joint investigation by the Alaska State Troopers B Detachment Patrol, Alaska Bureau of Investigation (ABI), Statewide Drug Enforcement Unit (SDEU), Bureau of Alcohol, Tobacco, Firearms and Explosives (ATF), and the Palmer Police Department.  Defendants are Wasilla residents 30-year-old Amber Helmann and 18-year-old Christopher Everly; Palmer residents 19-year-old John Stern, 19-year-old Mitchell Cupp, 24-year-old Joseph Price and 18-year-old Joseph Owens as well as Laurie Plyler, 24, of Eagle River and Kevin Angel, 29, of Chugiak. A 16-year-old Palmer boy was also involved in the case and is being charged as a juvenile. All nine face a variety of charges to include first- and second-degree burglary, second-degree theft and second-degree theft by receiving. Any charges reported are merely accusations and the defendants are presumed innocent unless and until proven guilty.
The majority of the firearms stolen from the store have been recovered. Joint efforts by state, federal, and local authorities are underway to recover all the stolen firearms.
The ATF announced a $2,500 reward will be offered for information leading to the recovery of the stolen firearms as well as the arrest and conviction of the individuals responsible for the theft of firearms.
Anyone with information on the crime should contact the Alaska State Troopers at (907)352-5401 or call the ATF’s toll-free, 24-hour tip line at 1-800-ATF-GUNS (800-283-4867), the ATF Anchorage Alaska Field Office at (907)271-5701 or Mat-Su Crime Stoppers at (907)745-3333.

If you have information about this or any Felony crime, call Crime Stoppers at 745-3333 or submit a tip via the web at www.matsu-crimestoppers.org.  Your tip could earn you up to $1,000, in addition to the reward that ATF is offering above, if the information leads to the arrest or criminal indictment of the suspect(s).  Callers to Crime Stoppers do not have to give their names.  Crime Stoppers pays for information on other Felony crimes, Felony fugitives and the sale of illegal drugs if an arrest or indictment results from the “Tip”.

On Thursday 8/25/11 at approximately 9:23 PM, Alaska State Troopers responded to a structure fire at a property on South Lodge Drive, in Big Lake. The structure was unoccupied at the time of the fire and is a total loss with damage estimated at $3,000.00. The cause of the fire is considered suspicious and investigation is ongoing.